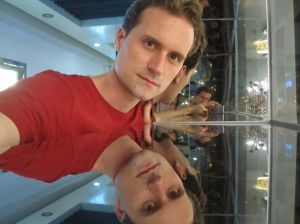 A young woman who crafts custom-made, realistic dolls begins to suspect that a very demanding client may be the mother who abandoned her at birth in Zayd Dohrn’s “Reborning,” opening this week at SF Playhouse. Mysteries in latex may run deep in Dohrn’s new play – his second world premiere in the Bay Area within two years – but explorations of hidden childhood seem to recur in his work. That’s probably no coincidence.

The son of Weather Underground leaders Bernardine Dohrn and Bill Ayers, Dohrn lived in hiding with his parents for his first few years. Now 33, married to writer Rachel DeWoskin and the father of “two little daughters,” he’s recently moved from New York to Chicago. Besides pursuing a busy playwriting career, he teaches at Northwestern University.

Q: You had a pretty unusual childhood.

A: In all sorts of ways. I guess we all do, in our own weird way. Mine was just more notorious than most. I grew up kind of on the run. My parents were wanted and living under assumed names, so when I was little we were sort of all over the place. Then when I was about 5, they turned themselves in and my mom spent some time in jail.

But by the time I was 8 or 9, we’d settled down into a relatively normal life. My parents were professors, my mom was a lawyer, and I went to school and stuff. The weirdest part of my childhood was way before I was able to think of it as weird. It all felt pretty normal when I was a kid.

Q: What made you start writing plays?

A: I’d always been interested in writing. Since I was little, I knew that’s what I wanted to do. It’s funny. I never was an actor or involved in productions. But I was always writing, and I started to discover that the part of it I was most interested in was the interactions between people, writing scenes and dialogue and actions between them. I liked the human scale of it.

So it went from there. I started writing plays in college and I really liked the process. And then here we are.

Q: Who have been major influences?

A: Brecht. Kushner is a big influence, Albee, Caryl Churchill.

A: A lot of things. We just had our first child, and my wife was shopping for baby stuff on eBay and came upon these listings for incredibly realistic, lifelike dolls, and she got very interested in that. She’s a very inquisitive person, and she was thinking of writing an article about this subculture of people who were trading and collecting and making these dolls. So we both got interested. You look up pictures of these dolls, you’ll see what I mean. They’re fascinatingly creepy and beautiful and strange.

But what my play ended up being about, like a lot of my plays, is an artist and what she is trying to do with her work. She makes dolls, but for me it became a way to think about why we do what we do. Why do we write? Why do we make things? Why do we try to remember people who are gone?

Q: Do you see playwriting as a political act?

A: I do. I guess I see everything as a political act – parenting, playwriting. Not in the sense of my parents, like direct political action, but political in the sense of trying to think about the world in as rich and full and complicated a way as you can. A lot of that means making sense of the power relationships, how gender, class and race determine who we are and what we are able to do. Any time you communicate to a group of people what you’re thinking, you’re trying to both make yourself understood and maybe change people’s minds in some way.