REBORNING opens January, 2015 at the Fountain Theatre in LA 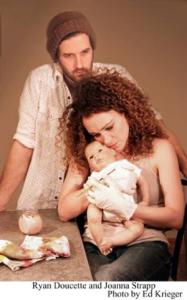 Launching the Fountain Theatre’s 25th Anniversary Season, Simon Levy directs Kristin Carey, Ryan Doucette, Joanna Strapp – and some very unusual, one-of-a-kind dolls – in the Los Angeles premiere of Reborning by Zayd Dohrn. How far would you go to create a family? A darkly funny psychological thriller that takes an unsettling look at work, motherhood and the power of healing, Reborning opens at the Fountain Theatre on Jan. 24.

In Reborning, a young artist who crafts custom-made dolls begins to suspect that a demanding client may be the mother who abandoned her at birth. As she tries to unravel the mystery, she discovers the path to her own “reborning.”

“The play is funny and macabre, but also deeply emotional and very moving,” says Levy.

A reborn doll is a manufactured vinyl doll that has been transformed to resemble a human baby with as much realism as possible. Although many consumers collect reborns as they would regular dolls, others use them to replace a child they once lost or a child that has grown up. The dolls often come with fake birth or adoption certificates, and their “parents” care for them as they would an infant. Because of their realistic appearance, reborn dolls have occasionally been mistaken for real babies and rescued from parked cars after being reported to the police by passers-by.

“It’s a pretty dark play, but kind of a comedy too,” explains Dohrn, who first became aware of reborn dolls when his wife was pregnant and they were searching for baby clothes online.

“We stumbled across numerous sites and forums for reborn dolls,” he says. “Buyers would testify how the dolls comforted them. I was trying to balance my own fears and hopes about becoming a father with my work as a writer and an artist, and I became fascinated. These dolls are realistic enough to be upsetting – beautiful and grotesque and odd all at once.”

Reborning received a workshop production at The Public Theater in New York City, followed by a world premiere production at The SF Playhouse in San Francisco. San Francisco’s Eagle News called it “A major triumph… a taut thriller that will keep audiences on the edge of their seats. You don’t want to miss it,” while the Chronicle praised the play’s ability to balance “humor, suspense and trauma.” The SF Weekly wrote, “Reborning proves that grim topics and taboos can also be damn funny.”

Zayd Dohrn’s other plays include Outside People (The Vineyard Theatre/Naked Angels), Want (Steppenwolf First Look) and Sick (Berkshire Theatre Festival). His work has also been produced and developed at Playwrights Horizons, the Atlantic Theater Co., Manhattan Theatre Club, Goodman Theatre, South Coast Rep, Ars Nova, Kitchen Dog, Theatre for One, Boston Playwrights’ Theatre, New York Theatre Workshop and the Royal Court Theatre in London, among others. He has written screenplays for the American Film Company, Bedlam Productions and Vox3 Films, as well as a pilot for HBO. He earned his MFA from NYU and was a Lila Acheson Wallace Fellow at Juilliard, where he twice received Lincoln Center’s Lecomte du Nouy Prize. He teaches playwriting and screenwriting at Northwestern University.

Simon Levy was honored with the 2011 Milton Katselas Award for Lifetime Achievement in Directing by the Los Angeles Drama Critics Circle. Directing credits at the Fountain include The Normal Heart (LADCC Award for Best Revival), Cyrano (LADCC Awards for Direction and Production), A House Not Meant to Stand; Opus (LA Weekly Award for Best Director); Photograph 51;The Milk Train Doesn’t Stop Here Anymore (Backstage Garland Award for Best Direction); The Gimmick (Ovation Award for Solo Performance); Master Class (Ovation Award for Best Production); Daisy in the Dreamtime (Backstage Garland Awards for Best Production and Direction); Going to St. Ives; The Night of the Iguana; Summer & Smoke (Ovation Award for Best Production); The Last Tycoon, which he wrote and directed, (5 Back Stage Awards, including Best Adaptation and Direction); and Orpheus Descending (6 Drama-Logue Awards, including Best Production and Direction). What I Heard About Iraq, which he wrote and directed, was produced worldwide including the Edinburgh Fringe Festival (Fringe First Award) and the Adelaide Fringe Festival (Fringe Award), was produced by BBC Radio, and received a 30-city UK tour culminating in London. He has written the official stage adaptations of The Great Gatsby, Tender is the Night, and The Last Tycoon for the Fitzgerald Estate, all published by Dramatists Play Service.

Housed in a charming two-story complex, the Fountain is one of the most successful intimate theaters in Los Angeles, providing a creative home for multi-ethnic theater and dance artists. The Fountain has won over 200 awards, and Fountain projects have been seen across the U.S. and internationally. Recent highlights include the Fountain play Bakersfield Mist in London’s West End starring Kathleen Turner and Ian McDiarmid; postshow discussion with playwright Tarell Alvin McCraney on the Fountain’s L.A. premiere of his play, The Brothers Size; the acclaimed L.A. premiere of My Name is Asher Lev; The Normal Heart (Huffington Post’s “2013 Top Ten Theater Productions”); and the sold-out Forever Flamenco gala concert at the 1200-seat John Anson Ford Amphitheatre.The Fountain has been honored with a Certificate of Appreciation from the Los Angeles City Council for “enhancing the cultural life of Los Angeles.”

Reborning opens on Saturday, Jan. 24 and continues through March 15, with performances Thursdays, Fridays and Saturdays at 8 p.m. and Sundays at 2 p.m. Preview performances take place on Wednesday, Jan. 21; Thursday, Jan. 22; and Friday, Jan. 23, all at 8 p.m. Tickets range from $15-$34.95. The Fountain Theatre is located at 5060 Fountain Avenue (at Normandie) in Los Angeles. Secure, on-site parking is available for $5. The Fountain Theatre is air-conditioned and wheelchair accessible. For reservations and information, call (323) 663-1525 or go to www.FountainTheatre.com.